Diplomate, American Board of Pediatric Dentistry 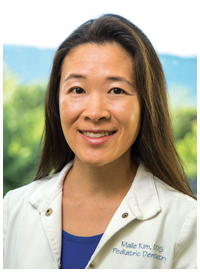 Dr. Maile Kim was born and raised in Kailua, Hawai'i. She graduated with a Bachelor of Science in Psychology from Pacific Union College and upon graduation decided to follow in her father’s footsteps (Dr. Howard Y.B. Kim) and pursue a career in dentistry. She says, "I learned the value of caring for others by seeing him ‘talk story’ with his patients. His communication style was honest, straight forward, but filled with compassion. He was my mentor and best friend so it was natural for me to follow in his footsteps."

Dr. Maile graduated from Loma Linda University School of Dentistry in California. She completed a General Practice Residency at St. Barnabas Hospital in Bronx, New York, followed by a pediatric specialty residency at New York University College of Dentistry. The time she spent away from Hawai'i provided opportunities to meet and care for many children from many demographics, including those children with special health care needs.

Dr. Maile is board certified and Diplomate of the American Board of Pediatric Dentistry. She is a member of the dental staff at Shriners Children's Hospital in Honolulu and faculty for the New York University Langone Dental Medicine Pediatric Dentistry Program. Numerous outreach trips to provide dental care to underserved areas has taken her to Mexico, Belize, Guatemala, India, Costa Rica, and Bolivia. Outside of the office, Dr. Maile and her husband, Dr. Bren Chun, organize plant-based cooking classes for their church community center.

Diplomate, American Board of Pediatric Dentistry

Dr. Bren Chun is a local boy at heart. Some of his fondest memories growing up were visiting relatives in Hawai'i every summer. He spent his childhood in Northern California playing piano, violin, and basketball. After graduating with a Bachelor of Science in Music from Pacific Union College he decided to follow in his father’s footsteps and pursue a career in dentistry. Later, it was Dr. Howard Kim who inspired Dr. Chun to specialize in pediatric dentistry.

Dr. Chun graduated from Loma Linda University School of Dentistry, then completed an Advanced Education in General Dentistry residency at Lutheran Medical Center – Kokua Kalihi Valley Health Center. He worked in private practice in both California and Hawai'i before pursuing a residency in pediatric dentistry at Albert-Einstein School of Medicine - Montefiore Medical Center in Bronx, New York. Pediatric residency was a life changing experience where he was able to care for many children including individuals with special health care needs.

Dr. Chun is board certified and a Diplomate of the American Board of Pediatric Dentistry. He is also a member of the dental staff at Shriners Children’s Hospital in Honolulu. He has served on numerous out-reach trips to provide dental care to underserved areas - South America, Thailand, Fiji, Philippines, and Honduras. Dr. Chun enjoys being active outdoors, making music, and cooking and baking for his family and friends. 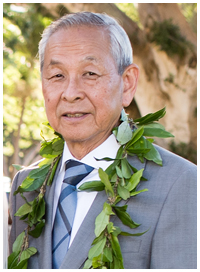 Dr. Howard Y.B. Kim grew up in Wahiawa, Hawai'i and fulfilled his prerequisites for dental school at Walla Walla College. He graduated from Loma Linda University School of Dentistry in California. He received his commission in the United States Air Force after graduation. He volunteered for the Vietnam Conflict but instead was sent to Osan Air Force Base in Korea. He received an honorable discharge from the military at the completion of his term of service.

Dr. Kim reentered the civilian workforce at the Office of Economic Opportunity funded clinic in South Central Los Angeles. It was there that he honed in on his passion for caring for children. He then pursued a pediatric dental residency at the University of Southern California, and upon completion of his training became the Chairman of Pediatric Dentistry at South Central Multipurpose Health Service Center in Los Angeles.

In 1975, Dr. Kim returned to Hawai'i and opened the doors to his pediatric dental practice in Kailua, Hawai'i. He was the first pediatric dentist to serve the windward side of O'ahu. In 1989, he opened his second office in Kane'ohe, Hawai'i. Through his 42 years of practice in Hawai'i, he dedicated his life to serving and caring for thousands of children. On May 10, 2017, Dr. Kim passed away unexpectedly. His honest, kind, and cheerful presence in our office will always be remembered and missed.

We are happy to announce we are now open for regular care!

There are many patients we need to reschedule. We ask for your patience as this process does take some time. If your child has any immediate dental concerns please call us.

During our closure we researched extensively to find the necessary steps to keep our patients and staff safe. You will notice that we have a few requests and have made the following changes at our offices:

To make an appointment please call us at 808-261-5354. We look forward to welcoming your family back to our office.